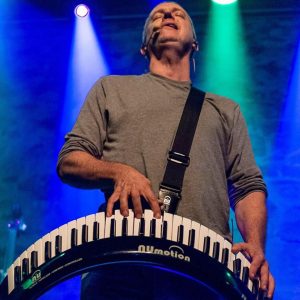 In the mid-80s, Dan became a vital force in the Quebec Rock scene. In 1990, he launched “Ange Animal”, his first album. Two years later he presents “Tue-moi” that he has completely produce. The album sells more than 80,000 copies and wins the “Felix” rock album Awards of the year. In 1993, he released “Les immortels”, a remake the great success songs that his mother loved. He also signs the arrangements for Gerry Boulet's posthumous album.

Then 2003 is the year of “Tout” that brings together memorable duets and highlights of recent years. In 2005, he came back with “Fou”, a very personal album in which he signed lyrics and music. 2008, “Duos de la Tendresse”, he brings the Quebec most beautiful female voices together. The album was certified Gold only a few weeks after its release. Autumn 2009, one year after “Duos de la Tendresse” and Dan realizes a fantasy, his latest album “FAN”. This album features the biggest hits of American black music that Dan has played for more than 15 years in bars. He was accompanied by MTL All City Big Band musicians.

For 20 years, Dan Bigras has been the spokesperson and organizes every year the famous “Refuge Show”, which raises funds to help young people aged 17 to 24. Idealist but down-to-earth: This is Dan Bigras!

Over the years, Dan Bigras has received numerous awards and nominations; 7 “Félix” and multiple nominations for “Gémaux”, “Geminis” and “Genies”, as well as for “ADISQ”. He was also proclaimed “Peace Artist of the Year 2007”.  The year 2008 was very revealing of his great involvement with society, being proclaimed “YMCA Artisan of Peace”, he receives the grade of Knight of the Order of the Francophonie and Dialogue of Cultures as well as Honorary Member of the Professional Order social workers from Quebec.