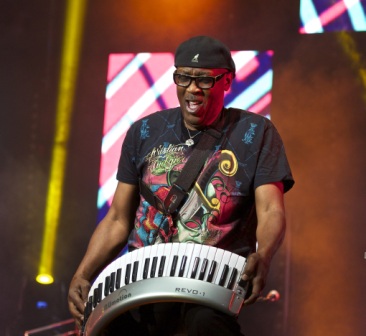 Slim’s musical career began at the age of nine, when he started playing the organ in his father’s Baptist church in North Carolina. His move to Detroit at eighteen marked the launch of his professional career. And what a career it was: The Spinners, The Drifters, and The Temptations were among the great acts he worked with. A series of unforeseen circumstances brought him to Quebec, initially to record an album in the Laurentians with his then band, Tchukon. As keyboardist and lead vocalist with Tchukon, Slim was instrumental in the band’s success. Slim was musical director for a number of important projects, including the 1996 Atlanta Olympic Games television special Salute to the Athletes, the World Basketball Championship in Toronto, as well as several galas at the MontréalJust for Laughs Festival. He also shared a Gemini award with Oscar Peterson for best original musical score for the Oscar Peterson biopic In the Key of Oscar. A pioneer of music technology, at an early stage Slim was able to harness all the expressive potential and expanded creative options of new compositional tools. He is currently at work in the studio, where his complex rhythms, melodic bass lines, and lush orchestrations. Slim describes this sound as sophistafunk, where refined jazz meets the driving beat of funk. He continues to be a driving force in the music community,